A visual artist and educator, Arlene Mollo held a Ph.D. in Law, Policy and Society from Northeastern University with a concentration in arts cultural policy. She earned a graduate degree in art education from the Massachusetts College of Art in Boston and a BA degree, with distinction in fine art, from Emmanuel College in Boston.

Watercolors by Arlene Mollo include landscapes and images created on location in England, Ireland, Scotland, Italy, the Caribbean and throughout the United States. Her artwork had been represented at Gallery One in Petaluma, California and locally by the SouthCoast Artists Guild at ArtWorks! in New Bedford, MA and Acquisitions in Wellesley, MA.

Mollo’s watercolors have been exhibited in regional galleries such as:

In Cambridge, she exhibited her works at the Schlesinger Library of Radcliffe College, at Harvard Neighbors Gallery of Harvard University and The Atrium Gallery at the Episcopal Divinity School. She also exhibited works in several juried shows including at the Cotuit Art Center, the North Shore Art Association and the Zullo Gallery in Medfield, Massachusetts. Her watercolors are included in numerous private collections throughout the United States, Canada and England.

She received many commissions to design permanent installations in stained glass and liturgical fiber arts for churches and worship spaces in and around New England. Samples of these include commissions for the:

She was a member of the New England Watercolor Society (NEWS) and a recipient of 2 NEWS awards for “White Trumpet Lily” and “Tabernacle” respectively and was a grant awardee for the National Endowment for the Humanities and Director for Maritime America in the Age of Winslow Homer, Summer Institute at UMass Dartmouth.

Arlene Mollo taught in the graduate and undergraduate programs in Art Education in the College of Visual & Performing Arts at UMass Dartmouth where she was Professor and Chair of the Department of Art Education. She was also an instructor at the Rhode Island School of Design. In addition, early in her career, Arlene taught art K-12 and served as the Chair of the Fine and Performing Arts Department for the Medfield Public Schools.

She maintained a working studio on Cape Cod and was very active in promoting arts and arts education in public spaces for the enjoyment of all. 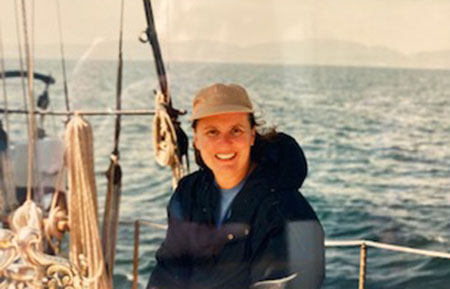 Arlene was a visual artist, educator, and professional watercolorist.

In Arlene’s own words, “for me, realism in painting is a way into a sensation of time and place. As I work, I am absorbed in the medium. I intend to be in the image—to become a part of the first moment of my connection to the place.” Arlene’s landscapes of Cape Cod and Scotland are prime examples of being “in the image.”

She used watercolors to express herself through her work. Arlene found this medium to be thrilling and exciting as it forced her to be clear and daring with her strokes and to use the white spaces as areas of greatest light.